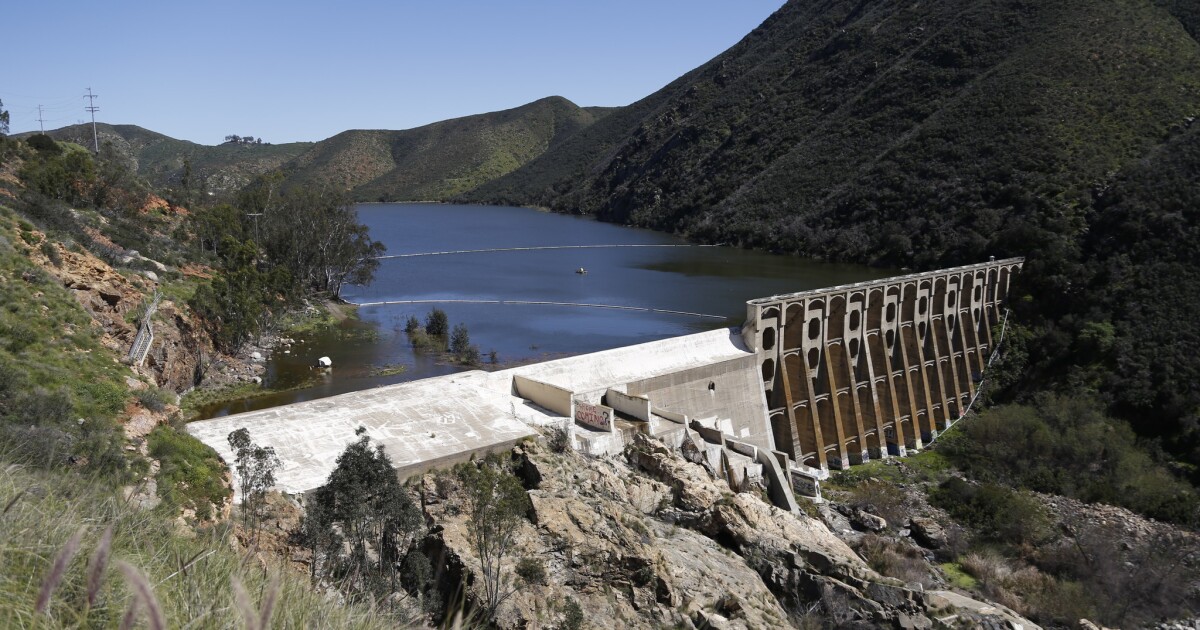 Lake Hodges Dam and Reservoir is owned and operated by the City of San Diego, Public Utilities Department

Lake Hodges Dam is a multiple-arch dam that sits on the San Dieguito River. It was commissioned by the Volcan Water Company and designed by John S. Eastwood.  It was completed in 1918, and later purchased by the city of San Diego.  Water from the Lake Hodges Reservoir is delivered to the customers of the Santa Fe Irrigation District and the San Dieguito Water District, and also to the City of San Diego’s water system.

Lake Hodges is now connected to Olivenhain Reservoir located in the highlands of nearby Elfin Forest Recreational Reserve. Olivenhain Reservoir was completed in 2003. Olivenhain Reservoir has a storage capacity of 24,000 acre-feet and sits 850 vertical feet higher than Hodges. The two reservoirs are connected by the Pumped Storage Facilities consisting of a system of pumps, pipelines, and turbines.  During times of low energy demand, water is pumped uphill from Hodges to Olivenhain, then returned downhill to generate electricity during high-demand periods.

Hodges Dam and Reservoir is owned and operated by the City of San Diego, Public Utilities Department.  By agreement, the local runoff captured in Hodges Reservoir is shared between the City of San Diego and the Santa Fe Irrigation District and San Dieguito Water District. In a second agreement, the storage capacity of the reservoir is shared by the city and the San Diego County Water Authority for the purpose of operating the Pumped Storage Facilities. These agreements stipulate that the costs of maintaining and operating the dam and reservoir are shared among the agencies.

The City of San Diego Public Utilities Department manages the recreation facilities and public access at Hodges Reservoir.  While costs of operating and maintaining the water resource features of the dam and reservoir are shared with other water agencies, all costs of recreation and public access are borne by the city.  Daily user fees help to offset these costs.

The land immediately surrounding Hodges Dam and Reservoir is under the jurisdictional control of the City of San Diego; i.e., it is within the city limits.  However, around most of the reservoir the city’s jurisdiction extends only a short distance above the high water line, and beyond this the land is under authority of another local jurisdiction: the unincorporated County of San Diego, the City of Escondido or the City of Poway.

The San Dieguito River Park Joint Powers Authority (JPA) operates a system of public trails on city-owned land immediately adjacent to Hodges Reservoir.  The River Park’s trails extend from below the dam to upstream of the reservoir-in fact, from “coast to crest.”  The City of San Diego is a member of the River Park JPA, and the costs of managing the public trails at Hodges is folded into the city’s financial support of the JPA.